The Air Quality Index – better known as the AQI – is a publicly available and up-to-the-minute record of air quality levels in different parts of the world. Although every government records and present the information in their own way, this article will focus on the AQI of the United States, which is one of the first and most comprehensive indexes in the world.

The US AQI focuses on five major pollutants: ground-level ozone, particulate matter (including both PM2.5 and PM10), sulphur dioxide, nitrogen dioxide and carbon monoxide. The concentration of each pollution is constantly measured on a scale of between 0 and 500, with the higher the figure indicating more pollution and a greater health risk. Generally speaking, a figure of 100 is regarded as the maximum safe limit for prolonged human exposure, whereas anything over 300 is thought to be hazardous to human health.

The following is a closer examination of those five contaminants in isolation. However, those keen to enhance their knowledge of the subject further would do well to attend this year’s Air Quality and Emissions Show in Telford in the UK in October. Held over two days, the event will contain much useful information on the topic.

Not to be confused with stratospheric ozone (that which protects us from the most harmful rays of the sun), tropospheric ozone, or ground-level ozone, is a damaging pollutant in its own right. It is not emitted directly into the atmosphere, but rather is created when a reaction takes place between volatile organic compounds (VOCs) and nitrogen oxides (NOx). In this form, it is a highly dangerous contaminant which can damage the lungs and respiratory system of those exposed to it.

Widely considered to be one of the most dangerous contaminants, particulates can take the form of PM10, which are 10 microns or less in diameter, or PM2.5, which are a quarter of that size or less. These latter pollutants are particularly damaging, since they are roughly 30 times thinner than a human hair and can be easily inhaled and even absorbed into the bloodstream. Thankfully, advanced particulate matter sensing technology has allowed for more precise air quality measurements, but there is still much work ahead to combat this dangerous contaminant.

Nitrogen dioxide is a non-combustible gas itself, but it can act as a catalyst in the combustion of other materials and gases. The largest source of NO2 emissions are cars, buses, trucks and other HGVs, since the combustion of fuel in their tanks releases the gas into the atmosphere. Recently, mobile measurements into the emissions generated by vehicles have allowed for better comprehension of the concentrations and effects of this pollutant, which can include death in extreme cases.

Most commonly associated with the pungent smell of burnt matches, sulphur dioxide is normally generated via industrial processes and smelting furnaces. It can, however, also occur after volcanic eruptions, when the air takes on the acrid smell of rotten eggs. Not only is SO2 damaging to human health, but it can compromise the health of ecosystems, jeopardising both flora and fauna, and serve as a precursor to acid rain.

Known as the silent killer, carbon monoxide is deadly even in relatively low concentrations if confined to a non-ventilated area. It’s for this reason that homes in the UK must have a working carbon monoxide detector in place. However, in ambient atmospheres, it is more of a contributing factor to climate change and other climatic processes. It’s normally generated from the exhaust fumes of vehicles, or from the partial combustion of organic matter.

2022 has seen AQMesh taken up as a proven and flexible air quality monitoring system by more users, including several in mining and construction. New users i... 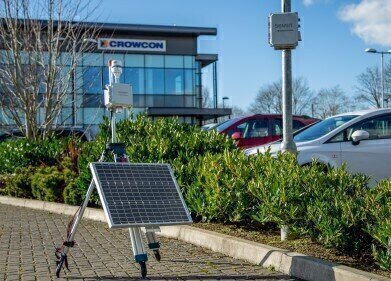